Opioids and the body: The science of an overdose

Ask somebody who has ever taken a powerful prescription painkiller to describe the feeling, and they’ll likely respond with words like these. 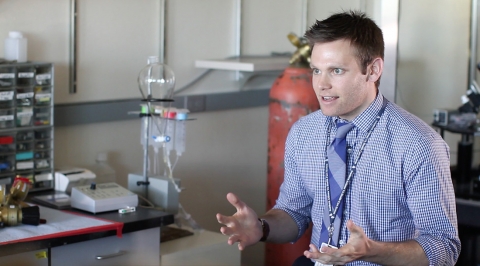 Sure, these opioid drugs can stop pain. But they also can make you high – and it’s chasing that high that often leads to addiction and sometimes death. Every day in the U.S., 46 people die from overdosing on prescription painkillers, according to data from the Centers for Disease Control and Prevention.

But what’s exactly happening inside the body when opioids enter the scene? What moves the body from pain relief to addiction to overdose?

To find out, Cronkite News talked to Alexander Sandweiss from the Department of Pharmacology at the University of Arizona. He has spent the past five years studying how opioid drugs interact with the human body because understanding these details can help develop a non-addictive alternative to opioid drugs.

Watch the video to understand the science of an overdose. END_OF_DOCUMENT_TOKEN_TO_BE_REPLACED

This class of drugs traces its roots back to opium processed from poppy plants as early as the first century A.D. Today, common opioids include prescription drugs such as oxycodone, hydrocodone and morphine. The drug takes many different forms – pills, patches and shots, to name a few – and the type affects how quickly it can get into your system.

“Endogenous” means “originates within.” Endogenous opiates are molecules that exist in your body, and they help to regulate many natural functions. For example, endogenous opiates can tone down sensations of pain, influence appetites and lower breathing rates.

Receptors are molecules that “receive” certain chemical signals from other places in the body. Opiate receptors are like puzzle pieces that only fit with opiate molecules, and they’re found in the brain, the spinal cord and even the digestive system. When the two puzzle pieces match, or “bind together,” this releases a signal that triggers a response in the body – perhaps a desire to eat. Opioid drugs have the same “shape” as endogenous opiates, which means they’ll fit with opiate receptors, too. However, opioid drugs trigger responses much more extreme than what the body would experience from endogenous opiates.

A neuron is a nerve cell. Networks of neurons form your body’s nervous system, which consists of the brain, spinal cord and peripheral nerves. If you touch a hot stove, neurons send a pain signal from your finger to your brain – that’s what allows you to feel the burn. So, opioid drugs block pain by binding to opiate receptors on neurons and signaling them to “turn off,” which keeps those pain signals from reaching the brain.

Dopamine is a natural chemical that motivates the brain to keep the body alive. By rewarding the brain with feel-good sensations when you do things such as eat, sleep or have sex, dopamine trains you to pursue these activities again and again – often without even thinking. This is where the addiction factor comes in with opioids. When these drugs bind to opiate receptors on the neurons that control dopamine release, it triggers an unnaturally high rush of dopamine. That trains the body to take opioids again and again. Over time, the body builds up a tolerance to that initial rush, which means you need higher and higher doses to produce the same euphoric and pain-relieving effects.

In this instance, “depression” refers to lowering the respiratory rate. When endogenous opiates bind to opiate receptors in the medulla of the brain, it tells your lungs to slow down. Opioid drugs bind to those same receptors. If someone has built up a tolerance to opioids and continues to take higher doses, this can cause the breathing rate to slow down so much that it finally just stops.

An opiate antagonist is a compound that blocks opiates from binding with their matching receptors. The non-addictive medication naloxone is one example. Some emergency personnel carry naloxone to treat cases of opioid overdose because it can kick off all the opioids bound to receptors throughout the body and restore normal breathing rates in as little as five minutes.

Original Story Link:
Opioids and the body: The science of an overdose